A Virginia Tech staffer (And senior dog!) who has spent a career serving and supporting the university community was recently recognized in a special commencement ceremony during Mental Health Awareness Week. 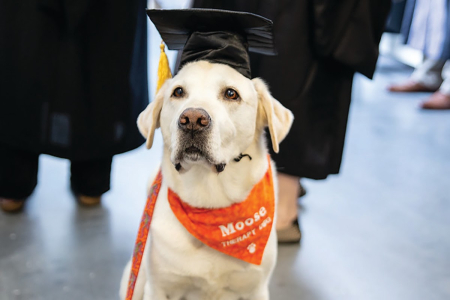 Like the Hokies he helps, Moose has had a challenging few months. Just a week after his birthday in February (his 64th, in human years), the Labrador Retriever was diagnosed with prostate cancer and began a treatment regimen of radiation, chemotherapy, and other therapies.

His treatment has been managed by providers at the Virginia-Maryland College of Veterinary Medicine, a joint venture of Virginia Tech and the University of Maryland at College Park. Moose was cared for and housed by a Virginia Tech veterinary student earlier this year while receiving radiation treatments at a private veterinary specialist in Richmond.

Moose, who came to Virginia Tech in 2014, is now one of four dogs at the counseling center who serve as working therapy animals and ambassadors for mental health awareness. 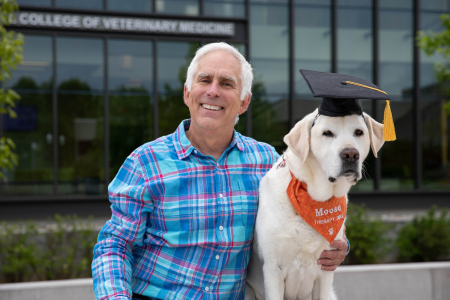 Trent Davis, the coordinator of animal-assisted therapy and a counselor at the center, credited Veterinary Teaching Hospital staff for providing Moose with excellent care. Moose continues to receive chemotherapy and has been given a pawsitive prognosis.

Moose has returned to work with canine colleague Derek, who is also owned and cared for by Davis. Virginia Tech’s team of therapy dogs is rounded out by Carson and Wagner, whose humans are also staff members at the counseling center.

Moose has aided in more than 7,500 counseling sessions and over 500 outreach events in his six years at Virginia Tech. He was honored in 2019 with the Virginia Veterinary Medical Association’s Animal Hero Award. When not working, he enjoys swimming, playing tug of war, and perhaps most of all, eating.

The Virginia Tech therapy dogs can be found on Instagram at @vttherapydogs.

Pandemic Stories: When your dog adoption doesn't work out. A fresh life lesson courtesy of a senior dog

What happens if you think you’re ready to adopt a dog, and you do, but days later you return them to the rescue? How do you feel? How do you process what happened? How do you understand that you got through the entire adoption process only to give them back? And, you go through this upsetting and unfamiliar experience during a pandemic that requires social distancing, masks and sheltering at home. That’s an unique twist. This is what happened to me and my husband.

We had the best dog in the world. We adopted her as adult from the SF SPCA and had the best adoption experience with them. Our new dog lived and flourished in our lives for nine years. She passed away five years ago. My husband was devoted to her and had no interest in getting another dog right away, if ever. After about a year passed, I was ready to be involved with dogs again, so I began volunteering at Muttville Senior Dog Rescue. I had loved my time during Cleo’s older years and appreciated all that she had shown me that I wanted to spend time with older dogs more. It has been a great experience going to the doggy loft each week. I am reminded of why I look toward dogs for answers to life’s moments since I was a child. They have provided solace, protection and simply a great distraction in the moment. 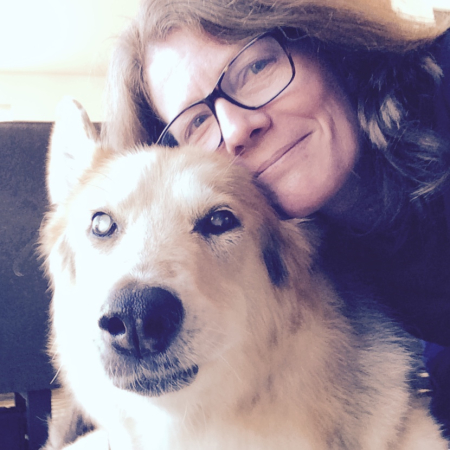 It’s no surprise that over the years I bring home stories and photos of the dogs at the Muttville doggy loft to share with my husband. I love sharing their personalities and all that I learned that day about the life of a dog. The stinky kisses and cuddles they share with me are pretty great too. Thanks to Muttville, I have learned so much about what little dogs are about. I’m more aware of their needs, behaviors and fears. Our previous dog had been a large shepherd husky with very different needs, fears and behaviors, plus her enormous size made her a third roommate.

Continue reading "Pandemic Stories: When your dog adoption doesn't work out. A fresh life lesson courtesy of a senior dog" »

Taking our dogs for walks is a wonderful thing. We both get valuable exercise, fresh air, and time to explore our neighborhoods. For many of us, springtime brings both pretty blossoming flowers and the dreaded foxtail plant. This dangerous barbed weed sprouts up along curbs, under trees on sidewalks and in parks. 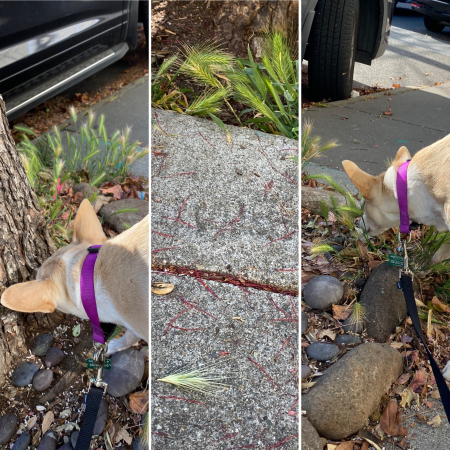 Protect your dog from foxtail plants

These dangerous weeds can get into your dog’s ear canals, inhaled into their nose or wedge between toes easily. Now is the time to keep a close eye on your dog while you are out together, and giving them a once over after you get home.

“The most common thing we see is when the barbed portion of the plant works its way between toes or into ears and noses,” says San Francisco SPCA Veterinarian Dr. Nicolette Zarday.

From the San Francisco SPCA:

What You Can Do To Protect Your Pet

Click here to learn more from the San Francisco SPCA

Be sure to check all over your dog after being outdoors. Foxtails can blow through the air on windy days so even if you are just out walking with your pet, they can find land and attach on their coat or paws. Foxtails can cause infections, call your veterinarian if you have any concerns!

Being lost can be scary for people or pets! It doesn’t matter whether you live in a city or in a rural setting, getting separated from family suddenly is frightening for everyone involved. I still remember as a small child getting lost for a few minutes from my mom while grocery shopping. I can imagine the panic a dog can feel when they don’t know how to find their humans.

Making sure your dog has an ID tag with current, readable, contact information is the first step to reuniting them with you if you ever get separated. The next step that is quite common now, especially for all adopted dogs and cats, is having your pet microchipped. Most states require dogs to be spayed and have a microchip before they can be adopted. However the next most important step you can take is registering your dog’s microchip and making sure all your pertinent contact information along with your veterinarian’s is included in your profile. A clear photo of your dog and any behavior detail is key to the profile too in case they ever go missing. 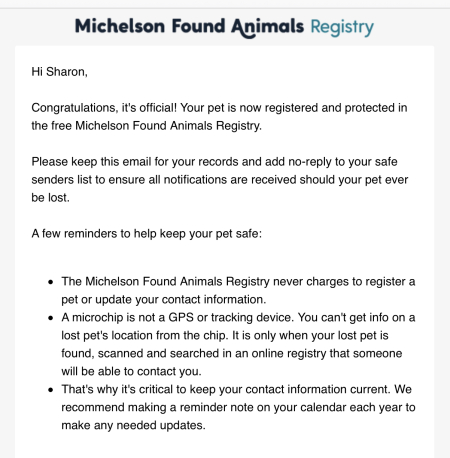 No one expects their dog to runaway but accidents happen, and every loving pet guardian wants to be prepared. This week is National Pet ID Week and the first thing I’ve already done is register the microchip on our new furry family member. We welcomed Ruby home from Muttville Senior Dog Rescue this week. As we settle in and get to know each other, part of the next stage is getting her a health check up, check her chip location, and making sure her new home and routine is fit for a senior chihuahua girl. Imagine my surprise that it would take many years and a pandemic for us to be ready to open our home again, to a dog who may be a quarter the size of Cleo but with an equal amount of heart and attitude. 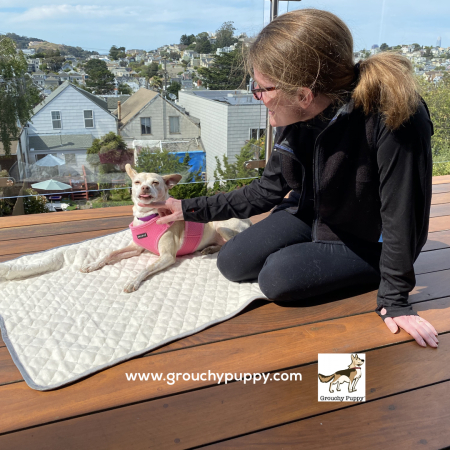 Click here for HELP if you’ve lost your pet

Plan ahead to protect your furry loved ones