Dogs and their stories matter to us: My Evening with Susan Orlean and Rin Tin Tin

You may not know this, but, our Grouchy Puppy logo is drawn from my first dog as adult, Cleo. Some people have told me that the image looks like a hero dog, or a super dog. Cleo may not be a super dog, but she is loyal and we have had some heroic experiences together, some of which have been written about on this blog.

The original American hero dog, who I just found out is actually from France, is Rin Tin Tin. On October 9th, I had the chance to learn this fact, while I spent An Evening with Susan Orlean and Rin Tin Tin at the San Francisco Film Society.

The event was part film screening and part literary Q&A. The SF Film Society theatre was filled with Susan Orlean the author fans, Susan Orlean the New Yorker staff writer fans, film buffs and many people who looked like they watched the original 1950's television series, as opposed to the reruns.

What everyone had in common, regardless of age, was the belief that the career and life of Rin Tin Tin is a sensational story, and says a lot about the animal-human bond. I love that Orlean combines her book tour with a screening of Rin Tin Tin's silent film, Clash of the Wolves, it is a great mix and made for an engaging evening.This was my first time seeing a Rin Tin Tin movie. As a child, I couldn't sit through anything where a dog was in danger, abandoned or hurt. I cried when Snoopy was left out in the cold, and when the 101 Dalmatians were stolen.

Continue reading "Dogs and their stories matter to us: My Evening with Susan Orlean and Rin Tin Tin" »

Butterflies are free to fly, fly away, bye-bye: Dogs in purple wings

Halloween is approaching, and our dog Cleo will not let us dress her up. She loves affection and attention, but apparently even a girl with a nickname of "black hole for love and cuddles", has her limits. But that doesn't mean we can't appreciate dogs that will let their people dress them up. 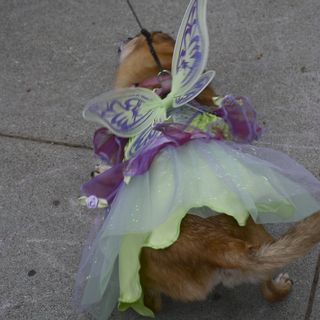 We can't tell if this dog is using his tail as a propeller, or if he's using his purple set of wings. Either way, we applaud the effort of this adorable princess/fairy/pixie/butterfly. 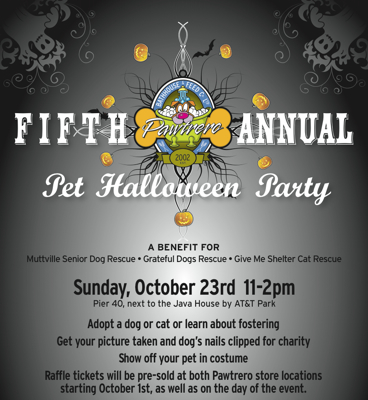 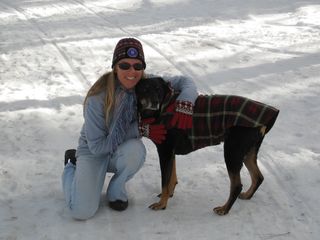 Lisa Dossey has loved animals since the time she was a tiny tot! She is honored to be doing what she loves and loves what she is doing! Lisa has worked in the animal welfare field for over 10 years. After moving to Colorado from the east coast, Lisa began volunteering at her local animal shelter; Lisa met and fell in love with an 8 month old Doberman/Lab mix. Lisa and her husband Brian and their fur child Bones, loved taking long hikes in the beautiful mountains of Colorado, while living in the ski town of Breckenridge. Lisa created and organized the first winter fundraiser for the Summit County Animal Shelter, and was also a member of LAPS (League for Animals and People of the Summit) offering assistance and support for local residents.

After moving to the Bay Area in 2001, Lisa began volunteering at the San Francisco SPCA, and was the top fundraiser for her team at the “DOGGONE FUN RUN” in 2006 at Golden Gate Park. All the proceeds went to the animals of the San Francisco SPCA and “PAWS”. She graduated from the San Francisco Dog Trainers Academy and completed their shelter in-house internship program. In 2005, Lisa attended the SF SPCA Public Class Curriculum workshop. Lisa is the current owner of Pups at their Peak Dog behavior consulting: offering private training, individual dog walking and dog and cat sitting, and she runs puppy and adolescent playgroups in Pacifica.

Lisa has written and introduced some new classes at the San Francisco SPCA: “Rocket Recalls” and “Loose Leash walking.” In loving memory of her beloved Bones, she recently offered the “Senior Dog Seminar” as well as a new class for just senior dogs and their people called “Senior Scholars” starting this fall. Lisa is an avid hiker, snow skier and reader. She completed her first half marathon in Lake Tahoe in honor of her girl, Bones, all shelter animals and turning 40! She is currently learning American Sign Language, with guitar and fiddle lessons next.

What is your idea of perfect happiness?

Healthy and happy loved ones. Cuddling with Bones and Brian in the mornings. Watching Bones roll in a scent; shred her plush toy; air hump and drool next to her favorite canine buddy; digging in the snow; watching her wiggle her stub and greet; and just being in her element, being joyful and being a dog. Reading the Sunday paper with Brian, and watching Bones read her “Sunday paper” - she loved to read a lot (taking in smells) on our hikes.

Six basic tips to protect your dog during Fleet Week

The start of October in San Francisco brings the sound of jet engines across our sky. If we have forgotten it is Fleet Week, our dog Cleo reminds us. She does not like the sound of July 4th fireworks, or F/A-18 Hornet jets. 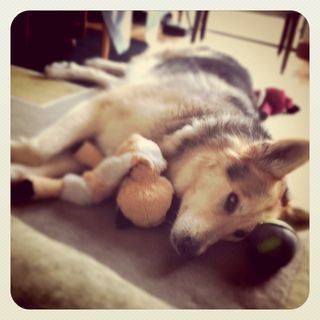 Today and tomorrow, the planes will fly from about 1:00pm to 4:00pm to practice before the weekend festivities, in honor of Fleet Week. By lunch time, whether you are taking your dog out for a walk or not, every neighborhood will have heard the Blue Angels practice runs overhead. However much fun it is for you to see their amazing skill and aerobatics, it might be scary for your dog.

Think my love for San Francisco is excessive? Think again. This postcard city once again, reminded me that I made the right decision to make my home here. Look at this poster. 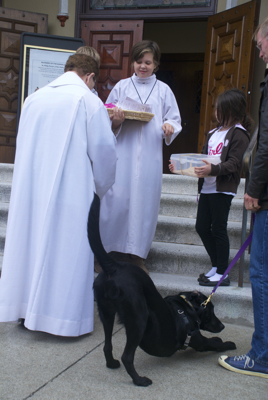 An Evening with Susan Orlean and Rin Tin Tin With a Screening of Noel Smith's 'Clash of the Wolves,' October 9 at San Francisco Film Society | New People Cinema 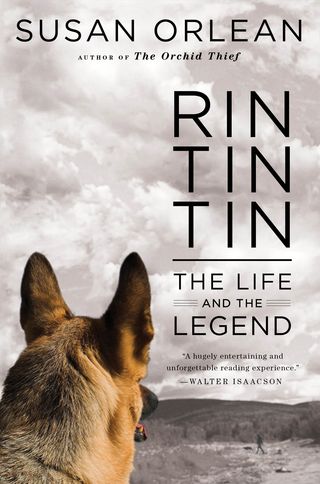 Susan Orlean will be at the San Francisco Film Society’s new theatrical home, San Francisco Film Society | New People Cinema (1746 Post Street) Sunday, October 9, 7:30 pm, to celebrate the publication of her new book Rin Tin Tin: The Life and the Legend, to introduce a screening of the action-packed silent Western Clash of the Wolves (USA 1925) and to answer questions from the audience following the film. 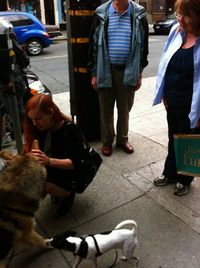 It will be six years next month since our adoption of our dog Cleo. She has been with us through thick and thin. We adopted her after months of thought and visiting with various adoption groups. However, ironically, the night we adopted her, we had nothing in the house for her. We couldn't have been more unprepared for a dog.

We scrambled, with her bewildered but loving self, driving around town to one resource after another to find appropriate dog gear and supplies. It was not what we had planned, but we love her even more for how well she seemed to trust our good intentions back then.

If my dog could talk to me, what would she say?

Have you ever stared at your dog, and wondered what goes on behind those eyes? I have a dog that can stare at you for the longest time. She might wink, or blink, but her gaze grabs you and pulls you close to her. I've stopped what I was doing to go pet her, or kiss her face, because her gaze told me to. 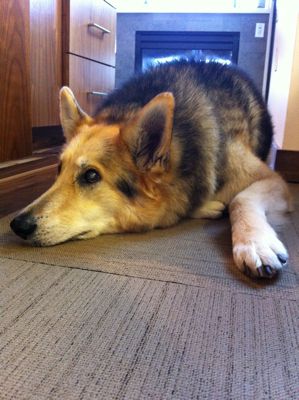 Her Shepherd-Husky face speaks volumes, without saying a word. With a poof of neck fur, and tilt of the head, her brown eyes can make you question yourself. Why am I sitting here writing, when I can be over there brushing her?

Spending so much time with my dog Cleo, I find myself mesmerized by her and distracted by ideas of what she would say to me, if she could speak. Am I alone, or have you wondered, If my dog could talk to me what would she say?

During the mornings, she likes to nap. She moves from one end of the house to the other, from one bed to another. When she settles in, often she makes a loud sigh, along with the sound of her body folding into itself. If my dog could talk, I bet she'd say "ahhh, now that is the right temperature, the perfect spot."

Continue reading "If my dog could talk to me, what would she say?" »

When worlds collide or the perfect Saturday

October is Adopt a Shelter Dog Month. Our dog Cleo is truly blessed today. We took her to a blessing of the animals this morning, at a local church. Afterward, she experienced a collision of all her favorite things in the world: people complimented her looks, small dogs loved her, older folks loved her, little kids pet her nicely, we brought treats with us & gave them to her, and she pooped twice. All on the first day of Adopt a Shelter Dog Month! 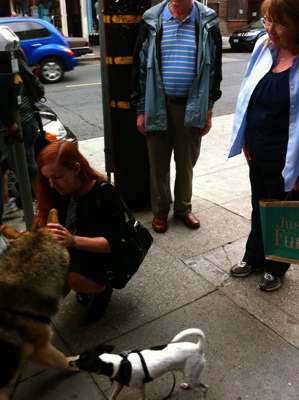 Continue reading "When worlds collide or the perfect Saturday" »