Dogs give fearlessly. Our dog Cleo positively influences people she encounters walking in our neighborhood. You can see why the Grouchy Puppy motto is: "Give Fearlessly, Influence Positively". We try to live by that motto, and celebrate its meaning whenever we see it demonstrated. Earlier this week, there was an incredible chain of events that highlighted why our motto is important and how Cleo inspired it. 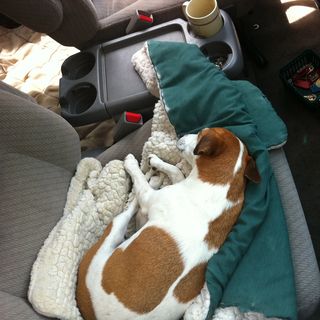 We decided to take our dog Cleo for a walk one morning along our main neighborhood street. It is lined with shops, full of new moms pushing strollers, delivery trucks, sidewalk sweepers, kids on their way to school, and people like us taking their dogs out while they picked up some coffee.

As we approached our favorite coffee shop, we noticed a firetruck and a paramedic nearby. The firemen we saw didn't look like they were in a hurry so we thought they were out getting morning coffee like us. The fire crew in our area also likes to drive around on the weekends so all the little kids can point and wave at them - not that we blame them. Firemen and Firewomen are pretty cool. It was as we got closer to the door of our coffee shop that Cleo's nose went up into the air, with real purpose. 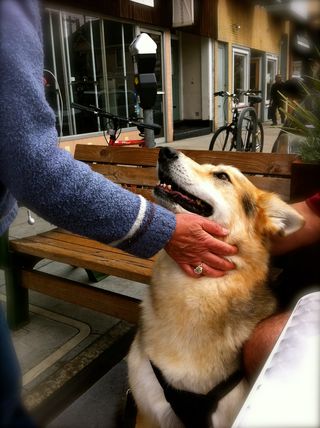 I was on the look out for other dogs and opportunities for Cleo to get into trouble. Larger dogs on the sidewalk put her on alert, and unexpected loud noises can make her jumpy, more so if the sidewalk is stuffed with people. Cleo is food motivated and is known for snatching up edible stuff off the ground. We've also seen her gingerly sneak items from little hands in strollers that happen to be unattended and mouth level for her. I saw her lick cream cheese off a giggling little girl's shirt once!

As we reached the coffee shop doorway, we saw someone on a stretcher inside. We decided to move past the doorway to wait until the coast was clear. We couldn't tell what had happened or how severe it was. While we waited, Cleo's nose hadn't stopped moving - like Tabitha on Bewitched - and she began to pull us toward a car. It was the Rudy Bus. This is the minivan that Cleo's dog walker drives. Inside the front passenger seat, was Lucy the Jack Russell. She jumped up to the open window and greeted Cleo with familiarity.

A moment later, Cleo turned away to lunge toward the stretcher now being pushed toward the ambulance. On the stretcher was Mary, Cleo's dog walker, and Cleo pulled us toward her. If we had let her, Cleo would have jumped up onto the stretcher like she does the kitchen counter. Instead Cleo wagged her tail and sniffed along Mary's side.

The sweetest moment was when Mary, even with a bandage over her eyes, called out to Cleo in recognition. The bond that these two older gals have is something. In that moment I loved Cleo even more for her positive influence over Mary.

That morning Cleo gave Mary peace of mind, and steadfast love. Because of Cleo, we had a chance to relieve Mary of the worry over Lucy's owner being contacted. We reached out to all of the folks that Mary had as clients. And later today, Cleo will be sending Mary a get well soon card, with photos of herself included.

How can you live our motto? Be like Cleo, positively influence your community. Be a good person. Choose to stop and spend your time or effort helping another. Granted Cleo makes it look easy, but we know you can do it too.

Your reward might be similar to Cleo's that day..the fire crew all pet Cleo, and said what a good dog she was. She gained a few more fans that day, and come the next election cycle, she just might be re-elected mayor of our neighborhood.

Dogs give fearlessly. Our dog Cleo positively influences people she encounters walking in our neighborhood. You can see why the Grouchy Puppy motto is: "Give Fearlessly, Influence Positively". We try to live by that motto, and celebrate its meaning whenever we see it demonstrated. Earlier this week, there was an incredible chain of events that highlighted why our motto is important and how Cleo inspired it.