Dog tricks and adorable dog faces are my weakness. While all the senior pooches rested on the other side of the plaza, halfway through our Muttville Senior Dog Rescue Day parade, I met Smokey and Puddin. The cuties and clearly proud parents were enjoying the slight warmth from the sunshine and doing some tricks! A smart way to warm up in the midst of those winds! Love it!!

We chatted about all the nicknames I call Cleo: stinker, puddin pie, cuddle fish, Stalin, Trotsky. They hadn't gotten to the literary nicknames yet but we all agreed that Puddin was definitely a favorite! More amazing alumni! At the Muttville celebration while we were "marching" in a somewhat loose formation across the Civic Center Plaza for our informal parade, I met a celebrity. No, not my local representative Scott Weiner, [District 8 shout out!!] but it was Calvin! Calvin di Matteo from Facebook! You know, in person, he reminded me a little more of Hobbes, but a seriously handsome cutie nonetheless. Another amazing alumni! Can Dog Toys Be Controversial?

Recently I saw this dog toy at my local pet shop. It is a Bony Baby called Osama Bone-Laden. 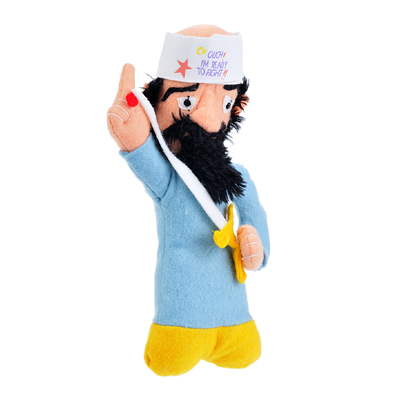 I met the adorable dog Sydney at the May 10th event. She is a Muttville alumni belonging to Annie, a Muttville volunteer. Don't you love her little pink piggy outfit?! How can you not support a rescue group dedicated to helping senior dogs enjoy the rest of their life with in loving home...clearly it pays dividends. Cindy Bruckart is a Certified Pet Dog Trainer and a Professional Member of the Association of Pet Dog Trainers. She is an evaluator for the AKC Canine Good Citizen program and a Licensed Dogs & Storks Presenter.

Cindy's training company, Regarding Rover, offers group and private training as well as workshops for dog owners and professionals.  Cindy hosts the Regarding Rover training podcast on BlogTalkRadio.com and is a long-time blogger for DogStarDaily.com.

What is your idea of perfect happiness? Perfect happiness is that time of the day when my dogs, cats, goats, chickens and granddaughter have all been cared for and are content and peaceful.  It never lasts long, but it's what I look forward to every day.

If you could come back as a dog or a cat, which one would it be & why? I think I would come back as a cat.  Expectations of cats are so much lower than those for dogs.  Even though, as a cat, I could be trained and socialized, no one would expect it.  I would be allowed to be moody, reclusive, lazy and demanding while still being loved dearly.

Sharon Castellanos on May 10, 2011 in Influence Positively, Interviews | Permalink | Comments (2)

Dogs inspire me. This video has been passed to us by so many people who feel bad for the dog. I decided I better share it for those who missed it.  Maybe you can tell me (in the comments), what it makes you think of when you see it.

For me, the dog is more of an inspiration as in "don't give up" or "focus, focus, focus", "don't judge a book by its cover", that sort of thing. People who know me would likely get how I might see the positive to this situation. Either way, I thought it felt right for a Monday.

Sharon Castellanos on May 09, 2011 in Give Fearlessly, Musings, Pets/Family | Permalink | Comments (3)

Gifts for Every Mother

Today is Mother's Day and we're enjoying our day like many. Our family includes a dog rather than a child but the sentiment is the same. I know she is grateful and would do whatever she could to make me happy, in her own dog way.

Her efforts within our family are always appreciated, even if they do not include making me a card or paper-mache flower vase or shellacked wooden picture frame. Today, like everyday, I will accept her tuna and liver breath kiss with a smile. We will cuddle and play chase in the house. Her image is already engraved on my heart and behind my eyelids, those are gifts this dog mother doesn't need wrapped or hung on a chain. Happy Mother's Day to all.

In recognition of Muttville's dedication to saving senior dogs and in honor of Maxwell, their 1,000th rescue, San Francisco Mayor Ed Lee has proclaimed May 10, 2011 as "Muttville Senior Dog Rescue Day"!

We are leaping with joy! We appreciate all of those who work so hard to help end the homeless pet population. So many people work tirelessly in the trenches for animals all over the world, and on May 10th we get to recognize the hard work of tireless pet advocate, Sherri Franklin and her team of volunteers and staff. 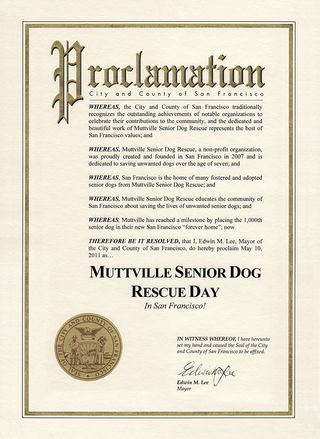 Sharon Castellanos on May 07, 2011 in Give Fearlessly, Good Cause, Influence Positively, Special Events | Permalink | Comments (0)

Dogs are amazing creatures. They are resilient and when given even a drop of affection, will allow you to take them places. Our friend Carol Bryant, amazing writer and dog lover of the highest order, knows all too well about traveling with a dog. She criss crosses the country for FIDO Friendly magazine with Dexter, her beloved and quite handsome (trust me we've met at Blog Paws in Denver!) Cocker Spaniel. 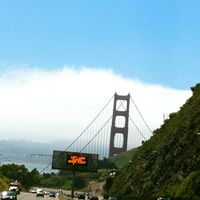 In the May/June 2011 Issue of FIDO Friendly Magazine, Carol writes a piece on traveling with your dog, at any age, any stage. Just in time for summer vacations and even staycations, this article [see page 66-67] has tips, great travel gear suggestions and [what a surprise!] even includes a contribution by yours truly about traveling with a senior dog. We're thrilled!

What Carol shares is valuable for every traveler wherever they live: from the unique concerns if you want to travel a puppy to remembering that older dogs can’t hold their bladder or bowels as long as they used to, so watch for the telltale signs of "I gotta pee!" Cleo has a very specific sort of look on her face and type of pant. Incredible valuable knowledge for everyone, and something that is getting more attention in the news, is learning canine CPR. Besides carrying a list of important phone numbers and medical records, having this skill in your bag of tricks, could mean everything in a moment's notice, on the road or not.  I'm planning to look into getting certified myself this summer.

Our relationships to our pets can be complicated. With Mother's Day this weekend, I have been thinking about my relationship with our beautiful Shepherd-Husky dog Cleo. We have been together for more than five years now. Our time together has flown by, and in many ways is still as murky and self-correcting as our first rainy night. I learn so much about myself and her, not to mention dogs in general, on a regular basis. Sometimes I am embarrassed by what I don't know.

To honor the mystery of these relationships, here is a wonderful book and now animated feature called My Dog Tulip.

My Dog Tulip is a beautifully animated story starring the voices of Christopher Plummer, the late Lynn Redgrave and Isabella Rossellini (love her! Did you see her Animals Distract Me film?).

MY DOG TULIP is a bittersweet adaptation of the late British author, J. R. Ackerley’s 1956 memoir, that explores the 16-year relationship with his adopted Alsatian dog Tulip.  Many of us can relate to the intense contemplation surrounding their relationship. Co-founder of Pilots N Paws, Debi Boies says she’s always had a deep connection with animals.”I feel strongly that it is our responsibility, as humans, to be the guardians for animals others have abandoned, abused, or simply can no longer care for,” she says. “If we don’t, then who will?” Debi is a retired nurse, horse breeder and long-time rescuer. Before Pilots N Paws, Debi was one of the founding members of Doberman Assistance Network, Inc, a national Doberman rescue group.

Pilots N Paws is a 501c3 charitable organization who through the help of general aviation volunteer pilots, transport rescue animals by air. The mission of Pilots N Paws is to provide a user-friendly website communication venue between those that rescue, shelter, and foster animals and pilots and plane owners, willing to assist with the transportation of these animals. It launched in February 2008 after Boies’ Doberman pinscher had died.

She wanted her next dog to be a rescue. One issue that came up was adopting a dog from afar. Among animal groups there are calls for transporting pets to new homes. These “road warriors,” as Boies calls them, man a route with volunteers donating time and wheels to get an animal home. Boies was familiar with these pet caravans, and with the troubles they face – whether it’s an antsy animal or if a car breaks down – when a pilot friend, Jon Wehrenberg, suggested flying the new dog home. “Pilots look for reasons to fly,” he told her, and as a result, Pilots N Paws was born.

And while Boies lives in South Carolina, her organization is national, with pilots from all over – donating time and resources for a good cause. “It’s almost as if they understand that this is their chance for life,” Boies says. Pilots N Paws continues to make a difference in the lives of innocent animals. We have flown thousands of rescue animals, military working dogs, service dogs, and dogs soldiers have adopted from war zones to safe havens provided by rescues and families.

Volunteer pilots have worked together and flown animals outside the U.S. We have also assisted with dogs who have been adopted by our soldiers overseas in Afghanistan after they fly to the U.S. on commercial airlines. We then pick up the final leg of the transport and fly them to the soldier’s home. This is extremely rewarding!! Honors and Awards: Broadway Barks Award/Bernadette Peters and Mary Tyler Moore, The American Dog Magazines 1st Annual Humanitarian Award, The Augusta Humane Society’s Casie Ritchhart Memorial Award, Co-Founder Debi Boies listed as one of the “25 top Pet People of 2010” at petside.com and most recently the Humane Society Naples Animaltarian Award.

What is your idea of perfect happiness? ** A world where kindness abounds.

Sharon Castellanos on May 03, 2011 in Influence Positively, Interviews | Permalink | Comments (0)